Where do waves come from?

Waves can be caused by: objects falling into the water, wind, floating ships, movement of tectonic plates, underwater landslides, release of icebergs and earthquakes.

Is there life in water depths?

Yes! 60% of Earth cover water depths. It is extremely dark and cold, the pressure is high and unbearable, and yet life goes on there.

What glows in the water?

It's bioluminescence. Some bacteria, protozoa, invertebrates and fish produce light by themselves or with the help of symbiotic bacteria.

How are coral reefs formed?

Reefs are formed from coral remains and other organisms. They form the foundation of the reefs.

Do dolphins swim in the Baltic Sea?

There have been occasional visits of dolphins in the Baltic Sea, while our waters are permanently inhabited by a porpoise - a cetacean smaller than dolphins, but equally intelligent.

Water is 830 times denser than air - the densest liquid environment on Earth. The resistance in water increases rapidly with the speed of movement.

Hydrotherapy and balneotherapy are still used today. Historically, the belief in the healing potential of hot baths dates back to the 4th century B.C., when the first Roman baths were built.

Where do the healing waters come from?

From inside the earth. Healing waters in Poland are mainly extracted in the Carpathian and Sudetes areas (Cieplice-Zdrój, Duszniki-Zdrój, Lądek-Zdrój, Połanica-Zdrój).

How do healing waters work?

Their mineral components can change the pH of digestive juices in the stomach and intestines, make up for mineral deficiencies and affect the water-electrolyte balance of humans.

How do waterfalls come to exist?

The Victoria, Iguazu or Niagara waterfalls are a result of a flowing water eroding through a rock. This is how the rock thresholds and cascades are created. This kind of erosion is called a headward erosion.

What are underwater rivers?

This phenomenon is the effect of mixing waters of different salinity (different density). As a result, a huge river flows on the bottom of the Black Sea. It starts in the Bosporus and for 7 km carries more water than the Nile and Ganges combined.

Do all rivers flow into the seas and oceans?

No. The Okawango (a river in south-western Africa) does not enter the sea directly, but ends up in the Kalahari Desert, forming an inland delta of 15 000 km2.

Why are there few caves in Poland?

We are a lowland country, so the water does not get on favourable conditions to create caves. The deepest and longest cave in Poland (Jaskinia Wielka Śnieżna) is 824 m deep and 22 km long.

Why do people settle near rivers?

Flooding rivers are very dangerous, but at the same time they create conditions for cultivation. River settlements form a fertile fluvial terrace, which people use for example in the Yangtze Valley in China, where rice is grown.

How does water create natural wonders?

Many thousands of years ago, the Colorado River began to drill its bed into the rock. Centuries have passed, the sea level has fallen, and the river has cut deeper and deeper into the rocky ground. This is how the present natural wonder - the Grand Canyon - was created.

How did the Ancients deal with hydraulic engineering?

To this day, traces of about 200 Roman aqueducts have been preserved. One of the most spectacular works was the waterworks of Constantinople, located in today's Istanbul.

Could people live "on water"?

After the great earthquake that struck Haiti in 2010, the idea of creating a city that floats on the surface of water, immune to the effects of the earthquake, came up. It would be fixed with cables to the seabed.

How important is sea transport?

It is very important for China. Shanghai has one of the largest ports in the world. Containers for ships get in through cranes. The largest of them have a lifting capacity of 120 tons. A ship can hold up to 4 of such containers.

Since when Wrocław has bridges?

How to get energy from the sea?

The basis is to use the difference in water levels. Every tide drives the turbines. Such a power plant operates at the mouth of the Rance River in France. It satisfies the demand of 130 000 households.

Are there cities "on water"?

Yes. Venice was formed from a combination of 118 islets and stakes piled into the bottom of the lagoon. Amsterdam, Bruges, Stockholm and Alappuzha are also crossed by a number of canals.

Do hydroelectric power plants give more power than carbon ones?

Yes! Number 1 is the Three Gorges Dam on the Yangtze River in China. It has a power of 22.5 GW. It lets through 116 000 m3 of water per second. The largest coal-based power plants are not in the top twenty of the world ranking.

Does hydraulic engineering affect our planet?

Huge. Just filling the reservoir of the Three Gorges Dam made the axis of rotation of the Earth tilted (geographic pole shifted by 2 cm) and the time of rotation increased by 0.06 microseconds.

How often are water molecules exchanged in the hydrosphere?

On average, water in the hydrosphere as a whole is exchanged every 2800 years. It is estimated that in 100 years a water molecule spends 98 years in the ocean, 20 months as ice, 2 weeks in lakes and rivers and less than a week in the atmosphere.

Why is ice floating?

By changing its physical state, water in the form of ice increases its volume by about 9%. As a result, ice becomes lighter (less dense) than water and stays on the surface of the water.

Such things only in #Hydropolis

The printer installed at the entrance to the building works like a curtain, parting in front of the visitors. In the spring-summer season, all visitors of the exhibition start their tour by passing through the "wall of water", more specifically through the patterns and inscriptions displayed on the water wall. Walking through without getting your shoes wet is most certainly possible! This attraction is open only in a spring-summer season when the temperatures do not drop below 0 Celsius degrees.

So far, more people have set foot on the moon than have personally admired the landscape of the Mariana Trench. Two daredevils - Jacques Piccard and Don Walsh - descended to the bottom of the Challenger Deep on 23 January 1960 in the Trieste I bathyscaphe. In Hydropolis you can enter an ideal replica of this machine and imagine what a man feels when is 11 kilometres below the surface of the ocean.

See a blizzard from a close perspective. Snowstorms are dangerous and probably nobody would want to experience them in everyday life or in the high mountains. However, behind glass and in controlled conditions, it looks really magical, surreal. Snow simulator is one of the most often photographed attractions. When taking a picture don't forget to tag #Hydropolis #SnowSimulator on Instagram.

A special attraction in the States of Water Zone - everyone will be able to see how steam turns into fire. This surprise will please not only the children, but also their carers! Why? Mainly because the flames don't burn, they're not hot, so they're safe and they're brilliantly posing in pictures. If you take photos, add them on Instagram and tag us with the hashtags #Hydropolis #FireFromSteam.

See more atractions
Buy online or in the ticket office

for safety reasons max 60 visitors per every half an hour

Where to park? Where to eat in the near area?
Which means of transport should you use? For whom is this exhibition designed? 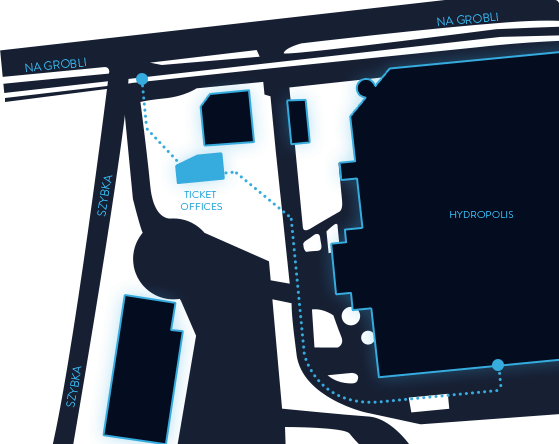 THE OFFICIAL MOBILE GUIDE APPLICATION HAS BEEN LAUNCHED

On Google Play and the App Store, our free application is now available, thanks to which visiting of our Center will become more interesting and much easier.

The results of the 2017 European Copper in Architecture Awards 18 have just been announced. The Maersk Tower research complex in Copenhagen, designed by C.F. Møller Architects and characterised by its grid of copper fins, was the outright winner. Two infrastructure projects were Commended and the Hydropolis water sculpture pavilion in Wrocław, Poland, received the Public Choice prize.

Water printer out of service

Dear Guests! We kindly inform, that during winter break, which starts 6th of November, water printer will be out of sevices. We apologize for the inconvenience.

Tour in Hydropolis with an audio guide

Remember to take along the earphones!

Thanks to the use of the technology of beacons, the lector will talk about the nearby exhibits.

Additionally — in three places in the centre you will find our mascots — visible thanks to the technology of Augumented Reality.

Allow to be introduced to the most important points of the exhibition.

Listen to a fragment of our audio guide…

…and download it to your phone before you start the visit.

Addictive fun not only for children. Swimming with dolphins and exploring the seabed is just the beginning.

After purchasing the ticket, we invite you to our bistro or cafe for delicious coffee or sweet and savory snacks. The bistro is located on the route from the ticket office to the exhibition. The cafe is located underground, right next to the Entrance Area.

Looking for an idea for a gift? Get one of our educational toys for children, a souvenir from Wrocław or a Hydropolis gadget.

Among over 70 of them there is - a grand Earth model with a 360 degree screen of 65 metres in length. The exhibits are accompanied by over 40 scientific articles.